Ascension Island is a volcanic island situated 90km west of the Mid-Atlantic Ridge – (MAR), where its formation began ~ 6-7 Myr ago1. At the ocean floor (3000 m deep) Ascension covers 2000 km2, whereas only 88 km2 is exposed above the surface of the waves1 – corresponding to only the last million years or so of activity2,3. Ascension’s highest point is Green Mountain, at 859m above sea level, it has been one of the island’s main centres of volcanic activity.

The question of the origins of Ascension Island and its volcanism are as of yet not fully resolved. It has been postulated that Ascension overlies a diverted shallow mantle plume similar to other oceanic islands not associated with subduction zone arc magmatism e.g. Hawaii4,5. More recent data from radiogenic isotopes indicate however, that magma production could be related to a portion of anomalously enriched mantle that was initially located at the MAR, initiating magma production and volcanism – only to be carried westward away from the ridge due to plate motion6.

Ascension exhibits multiple rock types that represent its varied volcanic history, with differences not only in composition, but also in eruptive style – from lava flows and domes to thick pumice and scoria deposits. The range in rock composition observed on Ascension is atypical for an ocean island. Where usually we see only the endmember rock types from mafic (basalt) to felsic (rhyolite) on many ocean islands, Ascension’s rocks display the entire range in SiO2 content, along an alkaline trend from basalt – hawaiite – mugearite – benmoreite – trachyte – to rhyolite7 (see figure 2). 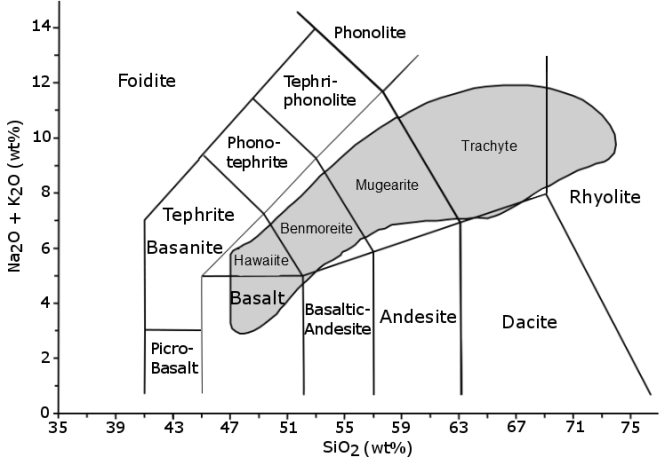 Mafic lavas on the island have been sub-divided into three groups based on the ratio of Zr/Nb as these trace elements reflect heterogeneity in the magma source region2. These groups are defined as high, intermediate and low Zr/Nb based on trace element analyses of the lavas. It has been concluded through analytical work and modelling, that the felsic rocks on Ascension evolved almost entirely from the high Zr/Nb lavas through simple fractional crystallisation processes3.

Historically, the island has been divided into “complexes”, and regions distinguished by their common rock types7,8,9.

This region is dominated by intermediate Zr/Nb mafic lava flows and scoria cones with some mafic ash fall deposits in the NW near to Long Beach. The entire NW of the island is dominated by this array of rock types. Lava flows here vary in composition between basalt, hawaiite and mugearite with some benmoreite flows outcropping near Long Bay and west of Lady Hill in the west of the island and near Broken Tooth and Hollow Tooth in the north where benmoreite cinder cones are also observed9.

The younger of the felsic complexes, dominant rock types in this region are felsic lavas and felsic pyroclastic deposits which exhibit a ring-shaped geometry. Felsic lavas are composed of trachytes and rhyolites (shown in dark blue) and are expressed as a combination of lava domes (Little White Hill) and thick lava flows (Devil’s Cauldron flow)7,9. Felsic pyroclastic deposits are composed of a mixture of pumice, ash, and crystals and represent explosive periods in Ascension’s volcanic history.

In the NE bay of the island Chamberlain et al., (2016) identified a deposit that transitions from pumice to scoria (a textural change generally associated with variation from felsic to mafic composition). This type of deposit outcrops around the western edge of the EFC boundary in several locations.

One of the most prominent features in this region is the Devil’s Inkpot lava flow, formed by a fissure eruption. The fissure eruption extended from Letterbox to White Hill and is interpreted by Nielson & Sibbett (1996) to be close in age to the Sisters Peak lavas. Benmoreite scoria cones are also present, representative of more explosive mafic volcanism.

There are also older trachyte and rhyolite lava flows and domes and pyroclastic deposits here including pumice falls.

These rocks are generally older than those in the EFC. In the Middleton Ridge area we see multiple pyroclastic density currents (PDC’s) containing volcanic breccia and pumice lapilli – which can be trachytic in composition. Ash layers within pyroclastic density currents exhibit varying degrees of welding and can be lithic clast rich9. Volcanic breccia here contains abundant rhyolitic blocks and fragments of obsidian varying in size from sand grade to cobbles. Felsic lavas are also present around Middleton Ridge as trachytic and rhyolitic flows7.

Green Mountain shows a similar display of trachytic lava flows and pyroclastic deposits but has a mafic scoria cone high on its flank, the source for much of the mafic ash that covers the SW slope9. Green Mountain scoria is host to plutonic xenoliths7.

The SW region of Ascension is the only place where low Zr/Nb lava flows crop out at the surface, along with intermediate Zr/Nb flows7. Benmoreite lava flows dominate, interspersed with scoria cones and mafic ash fall deposits.

The South coast region of Ascension is the only place where high Zr/Nb mafic lavas are observed7, these are the oldest mafic lava flows on Ascension3 and while restricted in outcrop to the south of Ascension they are the major mafic constituent (by volume) of the island (from sea bed to surface)11. Benmoreite flows dominate with a basaltic flow exposed in Crystal Bay and some mafic scoria cones e.g. Ragged Hill. Trachytic lava flows crop out just south of Ragged Hill and at the coast.

We are currently building an extensive set of 40Ar/39Ar dates to investigate whether there have been periods throughout Ascension’s history which saw high and low volcanic activity, differing eruptive styles and produced rocks of different compositions. With the help of statistical modelling we should soon be able to identify whether there is any periodicity to these different types of event.

Keep an eye on our updates page!

Felsic Rocks: Igneous rocks that contain >65% silica (SiO2), common minerals include quartz and alkali-feldspar. Rich in Si, Al, K and Na and light in colour they are less dense and more viscous than their mafic equivalents.

Mafic Rocks: Igneous rocks containing ~59% silica, common minerals include olivine, pyroxene and plagioclase feldspar. Rich in Fe, Mg and Ca they are dark in colour and denser and less viscous than their felsic equivalents.

Mantle Plume: An upwelling of abnormally hot molten rock from within the mantle of the Earth. Plumes are often used to explain volcanic activity away from a tectonic plate boundary e.g. Hawaii.

Pyroclastic Density Current: A flow of hot ash, rock and gas that forms when the ash column produced by an explosive volcanic eruption

Pumice: A felsic volcanic rock which is light in colour and has an extremely low density due a high abundance of small bubbles in the rock structure. Bubbles represent gasses trapped in the magma during eruption due to the high viscosity of felsic melts.

Scoria: A mafic volcanic rock which is dark in colour and contains a high proportion of bubbles. Formed during explosive eruptions of mafic magma scoria is more dense than pumice due to its Fe and Mg-rich compostion.

Vesicles/Vesicularity: Vesicles are voids in a volcanic rock that resulting from gas bubbles forming within a magma while it is molten. When the magma is erupted it cools rapidly and the edges of the bubbles are frozen in place. Vesicularity of a rock is what % of a rocks volume is taken up by vesicles.

Xenolith: A chunk of rock found within an igneous body (lava flow, pyroclastic density current, or plutonic body) that has a different origin to the surrounding igneous rock. Usually representing the rocks through which the molten material travelled to reach the surface.